You can also find me on:

The coming changes & disclosures of the 2020s 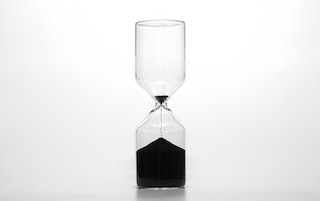 This article was updated in January 2022 and amendments are made in red below.

It’s 2021. By now, you must have realised that the world has changed beyond measure in 2020 due to the lockdowns and other restrictive measures forced onto entire populations throughout the world. Very importantly, the mentality of people has started changing too! After an unbearable inertia and status quo that have lasted for decades, many people are finally beginning to awaken to a greater truth about what their life means and the sort of world in which they want to live.

I’ve extensively shared my opinions about the coronavirus crisis so I invite you to check that section. The purpose of this website is first and foremost to help people navigating the coming changes in our societies; we will be facing such changes at an increasing cadence in this 2020 decade—and beyond. The awakening in manyfold: there is a spiritual awakening about which I talked more here, and there is a global awakening.

For many people, the awakening will be triggered or accelerated by the release of specific information globally—the famous disclosures. Needless to say that given the control and censorship of most media today, you cannot expect these information to go mainstream immediately; but eventually, they will.

The way I see it, there will be 3 waves of change:

I think most people do not realise yet that the intentional and criminal release of coronavirus unto populations—most likely in an effort of reducing world population (that was my opinion at the time of writing but today I reserve my judgement)—has backfired at the instigators and literally opened Pandora’s box. The little trust some people still had in the system has been shattered. They started to inform themselves on alternative media and what they found was so shocking that they’re not turning back. Awakening is a one-way journey.

Another backfire was caused by the eagerness of people to find answers to the perceived lies. In their despair, many have turned to new figures that have abused their trust... a chaotic state of affairs ensued (in which we still are in 2022). The path to Truth is convoluted.

Bringing you up to speed on Covid-19

The Coronavirus crisis is a social experiment, an attempt to test the limit of human submission to an oppressive system. The system was already broken before Coronavirus, it’s just that now many people see it for what it is: a ‘control matrix’.

Coronavirus will be used as a scapegoat for re-designing the system by the powers-that-be. Unfortunately for the collective, it will be a system that centralises even more their powers, creates a world dictature type regime—while being sugar-coated in the appearances of democracy.

They will convince us that Covid-19 has rendered radical changes inevitable. But this will obviously be a lie: the system was already broken because the system within its own design contains the seeds of its programmed failure: unfair, immoral, abusive, corrupted and therefore doomed to collapse (just study economics and you’ll understand how fragile and immoral the monetary system is for example). They’ll sell us a reboot in disguise. And it will be for people to be LUCID enough to see that what we need is real change, not a swap for yet another corrupted system.

It is the tenets of our society that needs changing. For example the false tenets of economy such as the myth of scarcity i.e. ‘there isn’t enough for everyone on this planet’. These base assumptions we were sold to embrace and justify the present system are simply not true; but we’ve been led to believe them since birth. They are obsolete, and they are going away.

Reading this section a year later, I realise that it explores a worst-case scenario. I saw a real peril in the way governments were handling the crisis and it triggered intense emotions in me. Today I am still unsure about the reality of the big picture about the Covid situation therefore I reserve my judgement. It may be that these risks never existed; that they exist but have been averted; or that they exist and are still threatening us.

The changes to come

We’ve all been going through some changes in 2020 at an individual level. Some people have seized the opportunity to grow themselves; some have been forced out of a relationship or a job that was not for them; others have binged on Netflix series with beer and pizzas at their side while living on benefits. That’s free will!

The next level of changes is collective.

There is so much that could be done to benefit the 99%; for example:

Some might say the above list is a utopia. I say it’s a blueprint—and yes it will take the times it needs to take. Some say man is evil inside and we can never move beyond our current world. I don’t agree. We were lied to and deceived. Our nature has nothing to do with that. As more people awaken globally, a shift in the dominant mentality will take place. We will all upgrade to a new way of being.

The famous disclosures and revelations many have prophesied will play a key role in all of this. For example, the disclosure of suppressed technologies such as free energy (if it turns out to be true) will enable the development of self-sustained communities and disrupt the domination of the energy mega-corporations and the enslavement into the current monetary system. The disclosure of more general information such as the true history of the human race (many segments in commonly-accepted history are obscur and need re-examination) and its spiritual destiny will expand what is seen as possible in a way that most can not even fathom today.

So let’s think about what’s possible for our future. We know the problems, let’s make space for the solutions now! There is so much work to do, seriously. There is a huge impetus right now, because we’ve seen that things can be changed that we thought were not possible. For example: millions of office workers are now working remotely with internet and video-conferencing whereas one year ago we were still living in a paradigm of ‘we must go to the office everyday’. If that was possible out of necessity, what else can we achieve out of sheer will?

It’s time to ride this wave of change!

Revelations are coming whether you like it or not. A typical syndrome called cognitive dissonance is better to be known to avoid feeling totally disturbed when you start hearing things that do not fit your belief system. It’s all about trying to preempt how destabilised you may feel.

Also, I’ve already talked about the Change Curve in another article and it’s still very valid. 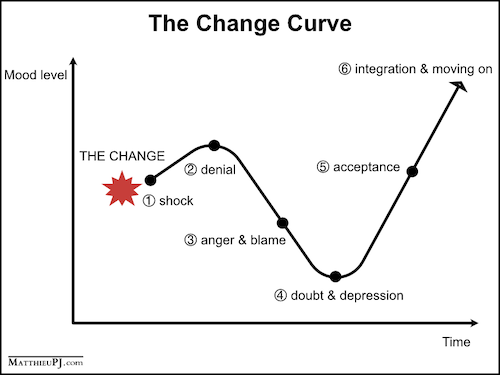 Yes, embracing change is difficult for everyone but I don’t think we really have the choice now. The older you are, the more difficult it will be because of the years or decade of habituation. But we must go through that now—and it’s a long overdue to be fair. In one or two generations we will look back and realise how archaic we were and take a good laugh together. But right here, right now, this is the time of change. A time when anything is possible. How exciting!

If you ever board an aircraft, in the safety briefing you’ll hear that statement. It means something very important: if you are not able to take care of yourself FIRST, you’ll be of no use to the people around you (may it be your family, friends or a complete stranger).

I am taking the bet that change like we’ve never seen before is looming in our world (this change will be caused by a change in the quality of human consciousness, in parallel with an awakening to higher truths). You don’t have to take my word for it. But if at least you keep in mind that this sort of things may happen one day, you’ll be much better prepared. And as one of the people who had been warned it may happen, you’ll be able to support your loved ones.

Due to the coronavirus crisis, many people are finally waking up. What we are living through right now is totally unprecedented in modern times. The transition to a different—and better—world has already started. Millions are working on alternative ways to live a life based on higher values, those that respect the environment and ourselves as spiritual beings. Yes, men are spiritual in nature and that will be part of the global disclosure.

As people awaken spiritually it will be revealed that human nature was never bad; instead, it is the dysfunctional system in which we all grew up that damaged us. And that system is going away! (don't hold your breath on that one, but at the scale of years and decades to come we are going to change a lot that's for sure. At the end of the 2020s we should be on a very different trajectory already)

We’ve entered a very exciting time of accelerated changes. The coming disclosures are inevitable and will tear apart our current model of society. A model that is based on deception, control and is unfit for an evolved race of beings as we should aspire to be.

I am convinced this is only a matter of time before we see radical changes. Nobody can tell when we’ll reach a major milestone, but many of us feel it’s coming. And to be fair, 2020 has already seen lots of changes that maybe we haven’t fully processed yet as a collective. But be honest with yourself: we all know, deep inside, that we need a deep change of paradigm because on our current course we’re going to hit the wall. Let’s stop pretending it’s not happening…

It’s the most exciting time for being alive in a while, because we will see more changes in the structure of society in the 2020s than in the past 50 years—if not more. I am filled with hope and excitement because I have faith that truth and common good will prevail. We can design a better society and invent a new way to live and relate to each other in harmony and oneness. It’s well worth a short period of discomfort.

Table of Contents of this article (made up of ~2300 words)