The importance of disseminating spiritual teachings 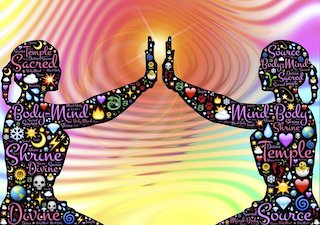 Why are people still interested in spirituality today? After all, in an age where it seems technology has solved most of our issues and that we’ve figured out most of the important questions in the Universe, one can wonder. When considering the clear trend in people of a withdrawal from religion (and therefore any form of spirituality at large) and therefore the advent of a society where agnosticism and atheism dominate, it may seem there is no longer any need for spiritual development.

But that is not the reality of the world in which we live.

After living for some time in Western societies, many people reach a painful conclusion—while many others never get the courage to admit it to themselves. That conclusion is that somehow, this supposedly perfect system with promises of happiness and satisfaction has failed them. That money truly does not make you happy. That in fact the accumulation of possessions can generate much anxiety at the idea of losing them—the old adage of ‘attachment being a source of suffering’. That somehow, even after doing all that society requires of you, you don’t quite get to a place filled with serenity and inner peace.

Most of us are too caught up in the rat race to even reach the level of contemplation required to draw these conclusions. But if they do, they will likely embark on a quest for answers. They will feel a deep craving for finding alternative ways to live their life in order meet true happiness. This deep longing for something else not explored yet, for meaning authenticity and happiness is one of the triggers of the spiritual journey.

The other side of the story

The collective is convinced that the people of the Earth live in very evolved civilisations and this belief is self-reinforced at any occasion. It takes brave individuals to challenge this proud posture. What if the entire story of our own glory was an illusion, a fabricated narrative that hides a more complex, subtle and painful reality?

Instead of an advanced civilisation as humans like to think themselves of, we are closer to a primitive society. Technological advance does not make a society great, because a society relies on people and their own state of personal development; not machines! The average level of consciousness of individuals gives a better indication of the level of advancement of a society as a whole. Not money, not the accumulation of possessions nor technological wonders.

In many aspects, many of us never leave childhood to enter adulthood. Behaviours observed as early as kindergarten are still commonplace among adults. Have you ever noticed that? The intellect may develop over the years, but the emotional intelligence and empathy for one another too often does not. Watching a session in parliament and observing children arguing can reveal similar patterns—and that is a disturbing realisation.

Add to that the vested interest of the few who are in charge of the destiny of the many to stay in power. Historically, they’ve ensured to keep a large base of ignorant and under-educated people, specifically on the topics that promote self-empowerment.

Many do not understand how to keep their body healthy and even worse are addicted to various substances and behaviours helping them to cope with unresolved emotional issues; judgement about everything is commonplace and especially when the topic debated is out of someone’s area of knowledge; a very materialistic model is promoted as the pinnacle of civilisation and has now reached the four corners of the world; media control the narratives of information fed to the billions; most are too busy dealing with a highly-complex regulated and stressful capitalist model—where they need to work constantly to pay the bills—to even start having the mental bandwidth to fathom the deep questions of human existence. They leave that to philosophers and the spiritual people…

So why should we share spiritual knowledge among humans? In one word, because it’s become vital. Coronavirus will not threaten the survival of the human species—contrary to some official narratives—but mass ignorance certainly will.

The world is changing and collectively, we are coming at the end of an ‘age’. This feeling is in the air—and it has already been for decades. It is even written in the stars and will touch each human person on Earth. It will also impact the entire planet: nature and environment.

The unfolding of significant events has been accelerating. We will witness profound transformations in our societies in the coming years especially till the end of the 2020s, and it will sometimes be through chaos as we’ve seen with the coronavirus crisis—which for the most part has been manufactured by media and fuelled by mass hysteria.

But, if people reacted so badly to a pseudo-crisis, how will they handle the real crises that are looming? One of the ways to cope with these unprecedented changes in modern times is to prepare ourselves at a personal level.

Spiritual teachings have always been present throughout human history. Mostly ignored by the masses and marginalised, they are about to take a central place in order to guide the collective at a time when nothing else can. That is because the ratio of awakened spiritual beings among the general population is increasing rapidly—and accelerated by events such as the coronavirus crisis. We will soon reach a critical mass at which point the entire collective mind will capsize. That will be like awakening from a dream for all the others who were still asleep. When we get there, the miraculous will become possible at the societal level.

We need to reconnect with our spiritual nature

Spirituality is part of human nature. We are born as spiritual beings and always will be. The fact that we grew up in a primitive society that does not recognise our spiritual nature and is obsessed with material existence is the root of the problem.

The domination and control from religions in the past has left a bitter taste in the collective history. But denying totally spirituality as a response is mistaken. Spirituality is separate from any particular religion or framework. It deals with the timeless questions such as: “why am I here?”,“what is the purpose of life on Earth?” or “what is the true nature of reality?”. But it also addresses more practical questions such as “how can I live a life true to myself?”, “how can I be fulfilled?” and “how can I find happiness?”. Answering these questions require to go beyond the appearances and break from the superficiality of a global society now for the most part based on a capitalist/consumerist/instant-gratification model—which is known to render people deeply unhappy while destroying unconsciously their living habitat (a.k.a the Earth).

At a time when the world does not make sense to people in the billions anymore, exploring our bond with spirit and reconnecting with our divine nature is the right path to follow—and one that many have already embraced. The world events are pushing us to act this way, because we know it’s time to reconnect with something important that has been lost. The missing part in our lives. We just need to remember what was forgotten.

Our civilisation cannot afford any longer to live in a pyramidal system where the few control the many and unhappiness is the norm—although often hidden behind fake smiles. Everyone must take ownership of their own destiny and claim their divine powers of choice and creation. The preparation at the personal level paves the way for the changes at the collective level. The world is changing and that is accelerating, and it will culminate with a series of planetary events. Only the elevation of the level of collective consciousness will help us at a societal level to finally make the right decisions and change our trajectory from self-destruction to prosperity.

Covid-19 was a forerunner: more is coming

Covid-19 was a wake-up call for many, a source of great confusion and anxiety for the most, but yet just another global event in a list that will keep growing. There’s no one single event that will be the trigger for mass change, it will happen gradually—and it already has started. Between January 2020 and today, the world is not the same anymore for example in the housing market or the work practices. Many people started to value space and nature instead of confinement in overpopulated urban areas; and many people now work remotely with no need to even step into an office.

Spiritual development will help people keep their sanity in a world that will become increasingly more complex to navigate. In the face of adversity, people with a solid knowledge of themselves and a strong faith are best equipped to endure. Those two attributes typically develop with spiritual practice.

And you, what role will you play in this global awakening? Have you noticed any deep change around you in: people, situations, institutions? And what actions will you take?

There is still time for those who are—at last—listening to their higher-self to choose a different path and focus on the life they want to build. There are growing communities of people who are looking for a new model of ‘living together’. Conversely, some will choose to remain asleep and follow the rest of the flock. Granted, there’s safety in numbers, but history has proven that it does not stop the collective from falling into an abyss every now and then.

Free will is a natural law and everyone must figure out these choices for themselves. Any infringement on someone else’s free will will backfire at you, therefore you must allow them to be and respect their decision—no matter how painful it may be. The entire process that is unfolding now is in many aspects a solo route.

Investing in yourself is the best investment you can make right now. Personal development, spirituality, wellbeing and healing-the-self are key topics. You are given the opportunity to be part of the growing group of people who are building the ‘New Earth’. The divide between the Old System and the New Earth will keep widening till there is a rupture. Then, it will be too late to jump ships.

Table of Contents of this article (made up of ~1800 words)