Astrology: the ten planets and what they represent 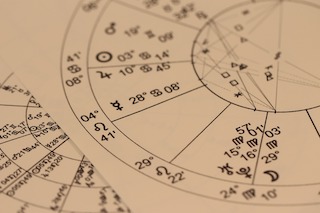 I’ve given a talk about Astrology focusing on the Zodiac Signs and you can find more about it here. In this article, I want to talk about the planets because they are another key aspect. In fact, they are even more fundamental than the signs: it all starts with them! When we look at the so-called ‘star sign’ of a person, we are looking at the Sun’s configuration at the time of birth (so we only consider one planet, the Sun, but there are nine more).

The Sun’s position in the zodiac gives the general flavour of an individual’s personality and basic identity. In other words, this is the best place to start. Hence the typical question “hey, what’s your star sign?” which really means “in which zodiac sign was the Sun at the time you were born, my dear?”

By studying and understanding the planets, we can better understand ourselves and other people.

From the Earth, you can see in the sky the major celestial bodies that are the planets of our solar system. Note that the astrological term ‘planet’ differs from what astronomy considers a planet. In astrology, there are seven ‘classical’ planets:

You can add another three planets that are not visible from Earth with the naked eye, but have been discovered since we had instruments: Uranus, Neptune and Pluto. So, all together, that is a total of ten planets.

Apart from the Sun and the Moon, the classical planets are named after the Roman gods of Antiquity. They can also be classified in three groups.

Because the trans-personal planets were added later, they were not part of ancient astrology yet they are used in modern astrology. They add refinement to trends already identified by the seven classical planets. And because they are so far-off from Earth, they move very slowly (it takes 7 to 15 years for them to transit a single sign of the zodiac!). More on that later.

Astrology relishes in the use of symbols, which makes it look quite obscure to the new-comer. That is just part of the culture: you just need to memorise them so you won’t be bothered anymore. They appear on birth charts for example.

Here we go, see below the keywords associated with each planet to give you a grasp of their energy.

Found the table above a bit overwhelming? I’ve got a simpler version if you focus on the main aspect of personality. That is for the seven classical planets only.

In this other simple list, we look at the type of person that a planet would represent in your life. That is for the seven classical planets only.

There is also a notion of octave, which means that there is a connection between two groups of five planets, as shown in the below table:

The idea is that we need to master the lessons of the lower octave (and each associated planet) before we reach the higher octave. For example: Mercury represents the mind and once the lessons of Mercury have been learned by the individual, he can reach the superior knowledge held by Uranus.

Each planet has a different orbit and therefore transits through the zodiac signs at a different speed.

The following table expresses the time it takes for a planet to transit a single zodiac sign. There are 12 zodiac signs therefore if you multiply by 12 the durations given below, it gives you the time it takes for an entire revolution as seen from the Earth. These are average times. Note that planets can have a retrograde motion, i.e. they appear to travel backwards (again, this is as seen from the Earth).

A quick take-away is that up to Mars it’s counted in weeks then it gets much longer. From Uranus onwards, it changes so slowly that it colours entire periods of humanity! Indeed, you can find similar events and patterns in mankind at times when these planets were in the same sign decades or centuries ago. Astrology is also linked to history!

The planets give the basic building blocks of astrology, followed by the zodiac signs. There is a relationship between planets and signs and that is the notion of ‘being at home’. It was observed that certain planets resonate with certain signs. It is said that a planet rules over a particular sign. A planet can rule over one or two signs.

It is a diagram showing the configuration of all the planets—and usually even more with up to ~10–15 celestial objects in total—at the time and place of birth. Note that it is time sensitive and you need to know the hour and the minutes when you were born to get your accurate birth chart.

Here is an example: 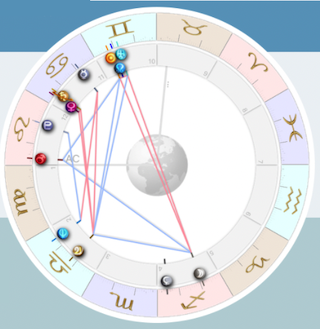 The twelve symbols of the zodiac signs

Table of Contents of this article (made up of ~1400 words)