The deception of the financial system 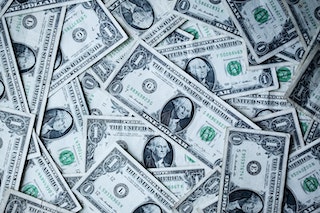 "It is well enough that people of the nation do not understand our banking and monetary system, for if they did, I believe there would be a revolution before tomorrow morning."
—Henry Ford (1863–1947)

Most people do not understand how the financial system work—or even what it is, for that matter. We are born in a world that seems ruled by a mysterious force called ‘money’. Money is an abstract concept; yet it seems to orchestrate and condition how our material lives unfold. In its physical manifestation, money is well known to the masses as: coins and notes. The US dollar ‘green bill’ has developed a cult of its own, and is a symbol of the globalised financial system. Money fascinates people and in a Western world dominated by consumerism, should we be so surprised? Soon enough, the majority of kids will learn—or figure out for themselves—that the accumulation of money seems to be a key to living a ‘happy life’.

However what the masses ignore—unless they study economy—is the way this entire financial system was built and runs. The opening quote by Henry Ford should give you a taster. He touches on key feature of our financial system: the banking and monetary system. I’ll stick to the salient points here.

Some people say money is an energy. It’s not. Energy is neither created nor destroyed, whereas money is created out of thin air. Banks are granted the revolting privilege of creating money. When you go to your bank to get a £500,000 mortgage or a £2,000 loan, the same thing happens: your bank ‘creates’ money by crediting your account of the amount you requested whereas in return they do not hold the funds to cover 100% of the amount they give you. Typically, they are only holding around 10% of the amount they loan you, and it used to be even less—which evidently contributed to many financial crisis, just research what a bank run is and you will soon understand.

Money creation is probably the biggest scam in modern history. Yet you rarely hear about it. Considering most people were born in that fraudulent system, it is not surprising that very few have developed an awareness of it. The last thing a fish notices is the water.

This is not to say that economy is bad in general and that we can or should get rid of money. I am just saying that the solution to the original problem has been distorted—some would say perverted. The original need for people was to be able to use a convenient currency that will allow to exchange goods without resorting to barter which was quite inconvenient and often needed a middle-man to mediate transactions. Currency was the answer, but initially it had a tangible value (typically: precious metal e.g. gold). Later on it moved to paper format yet it still could be exchanged against precious metal. What happened at some point in the course of the 20th century is that the money we use lost its correlation with any physical asset. What is a £20 or a US$20 note worth then? Well, it’s worth as much as people believe it’s worth. It’s based on the trust individuals have in the financial system. And currencies are seen as desirable only to the extent that the countries that issue them are seen as strong and reliable.

With the advent of digitalisation, money has moved even more into the intangible kingdom. The money you have on your bank account is essentially just a number stored on a computer system that is interconnected. It’s just a series of 0 and 1 written in binary code. Assuming someone had the right access, they could empty your account in a second because it’s just a digital record. As we are told we need to move to a cashless society (and it has accelerated as a courtesy of coronavirus), the concerns should be even higher. I doubt many people even realise that their wealth exists primarily in a fragile cyberspace until they exchange their money for something tangible.

Now we’re going to look at one of the tenets of modern economy. Despite what I was sharing above, most economists will try to convince you that we have a sophisticated and magnificent system that ‘works’. But it’s a fallacy. And one of the reason of this fallacy is that one its base assumptions is a lie.

Every system is built on assumptions. Economy is no exception. At the root of economy is the concept of scarcity. Scarcity is the belief that given a growing population of human beings on the planet, there is not enough goods for everyone. Scarcity is the opposite of abundance. Our world is dominated by the myth of scarcity, whereas it is the poor allocation and usage of our natural resources that give the illusion of scarcity. For example there’s well enough food for everyone on this planet but we can’t help having obese people on one side and people dying from famine on the other side. Can the Earth accommodate 8 billion inhabitants? Certainly—but not 8 billion who want the standards of living of the average American.

The belief in scarcity and the fear of not having enough has led to a rampant consumerism that precipitates the destruction of our natural habitat and environment. If you really want to address many of our global issues today, you need to address its foundation. People need to understand that scarcity is a lie and it’s only the greed of some people and their refusal to share equally that has led to our present situation. An entire system has been built on this false belief and the problem is not that this deceptive system exist, the problem is that we are allowing it to endure to this day.

Inflation and time value of money

In order to keep the economic engine from stalling, another key feature of economy is the necessity for the price of goods to increase indefinitely. That is what is called inflation and if you listen to the economic news you can’t help but hearing about inflation. Why? Because it’s a key measure of the performance of the economy at a given time and it impacts many other variable of the complex economic machine.

Inflation is an insidious mechanism that sees the price of everything rise over time. It’s usually slow and barely noticeable from one year to the other. But over time it compounds to enormous amounts. For example: an annual 2% inflation rate over a period of 20 years leads to a multiplication of prices by a factor of nearly 1.5. That is best observed on large amounts such as property prices which means with the same example that instead of paying a house £200,000 twenty years ago, you will now have to spend £300,000 for the same house. For those who are old enough, try to remember the prices from 20 years ago and you will understand what inflation truly means. In economy, this phenomenon is called the time value of money and reflects the fact that £100 is not worth the same today as in last year or one year from now. With the constant creation of debt, inflation is a necessity to keep the system from collapsing.

Yet, can we be so proud of our system and believe it is worth saving? Is it normal that millions are enslaved and must work endlessly at jobs paying poor wages while enduring a cost of life that doesn’t stop going higher and higher?

Economy is a fascinating discipline and most people would benefit from learning at least a minimum about it. But in a system like ours, it’s no surprise that is it not included in the default curriculum of every kid. Once more, knowledge is the antidote.

It’s quite shocking how everyone have been embarked unwittingly on the biggest fraud in history, for several generations already, and yet our system still runs—although the 2008 global financial crisis had the potential of wiping out the entire system and needed some serious recovery measures.

When you look at the concepts and ideas underlying our modern financial system, and you take time for reflection, you should see that the system is flawed and biased. And it starts with the myth of scarcity that is so ingrained in the collective mind, that it blinds us from seeing the unpleasant truth: it is our misusage of resources that is the true issue.

The banking and monetary system is a scam that is allowed to continue. The revolution Henri Ford was talking about has never really happened, yet the regular and increasingly severe financial crisis have given us serious warnings that the system was fragile and needed some specific measures to keep running. But when are we going to uncover the fraud? The system is built upon false assumptions and is doomed to collapse anyway. Prices cannot increase forever more while resources are being wasted and the spread of wealth between the richest and poorest keeps widening. And finally, will coronavirus be the ideal scapegoat for rebooting the entire economic system—while in fact it was by design that the system was flawed?

Table of Contents of this article (made up of ~1600 words)